More data? Princess Cristina of Spain may be named in corruption case

Princess Cristina of Spain may be named in corruption case 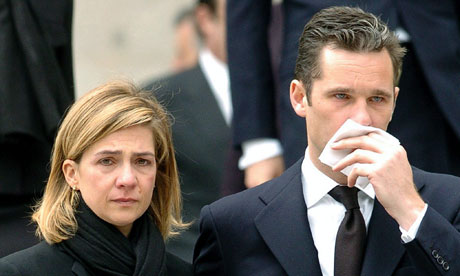 Princess Cristina and her husband, Inaki Urdangarin. The corruption case comes as Spain's senior politicians call for King Juan Carlos to abdicate. Photograph: EPA
As a financial scandal engulfs the royal family and politicians begin to call for his abdication, Spain's King Juan Carlos faces one of the worst weeks in his 37-year reign, with prosecutors set to ask a judge to formally name his daughter Princess Cristina as a suspect in a multimillion-euro fraud and money-laundering case.
The request, which would be a preliminary step to a possible indictment, is poised to be made next week and will be based on the testimony of Diego Torres, a former business school lecturer who became the partner of Cristina's husband, Iñaki Urdangarin.
Juan Carlos's nightmare week starts in Palma de Mallorca , when Urdangarin must appear before an investigating magistrate who has demanded that he and Torres post a joint bond of €8.1m (£7m).
The size of the bond points to the millions of euros that – via a foundation in which the princess served as a board member – the two men allegedly obtained from fraudulent deals with politicians keen to bathe in the reflected glory of royalty. Part of the money was allegedly then laundered through offshore accounts.
"If the princess sits in the dock, the blow to the monarchy's prestige will be huge," said Miguel Bernad, head of the controversial far-right Clean Hands movement that has sent a prosecutor to join the case and who will ask investigating magistrate José Castro to formally name the king's daughter as a suspect.
Castro has turned down similar requests before, but Bernad said fresh evidence had cast serious doubts over Urdangarin's claim that his wife had a hands-off relationship with the foundation. Urdangarin and Torres, who have been named as suspects but not indicted, also deny any wrongdoing.
The growing scandal surrounding the king's daughter and her husband, who were given the title of Dukes of Palma by the king after she married the Olympic-medal winning handball player in 1997, has reached a new peak as Urdangarin prepares to appear before Castro to answer more questions about the multimillion-euro deals struck by the supposedly not-for-profit Nóos Institute with regional governments in Valencia and the Balearic Islands.
Those questions will probably centre on testimony given by Torres last week – including dozens of emails that allegedly show that the king tried to help his son-in-law land potentially succulent, if legal, contracts. Torres reportedly has hundreds of emails stored, and has slowly been releasing them in what is widely seen as an attempt to pressure the royal family to help him avoid punishment.
Emails handed to the court reportedly include at least one from Corinna Zu Sayn-Wittgenstein, who made headlines last year when it was discovered she was in Botswana when Juan Carlos, who left his wife Queen Sofia behind, injured himself during an elephant-hunting trip. The king later made an unprecedented public apology for going on the trip. There was no suggestion of any of wrongdoing by Sayn-Wittgenstein.
Sources close to the case say, in evidence last week, Torres also claimed senior politicians from Valencia travelled to the king's Zarzuela Palace in Madrid to discuss future contracts with his son-in-law. A palace adviser who also served on the foundation's board, Carlos García Revenga, is also due to be questioned by Castro on Saturday.
The king is said to be outraged by his son-in-law's behaviour and last year barred him from officially representing the royal family. Last month, the duke's personal profile was erased from the royal website. A spokesman for the king said they had no comment to make on the evidence and emails provided by Torres, possibly because some Spanish newspapers have reported that the emails were unlikely to lead to Cristina being named as a suspect. One of the Valencia politicians who allegedly met Urdangarin to talk business at Zarzuela Palace, Francisco Camps, has denied the meeting.
"It seems clear that the king was trying to help in the business dealings of his son-in-law and daughter," said Bernad.
Discontent with the monarchy is no longer confined to avowedly republican parties or rightwingers, who have never forgiven the king for introducing democracy and transforming the state handed to him by dictator General Francisco Franco on his death in 1975, when Spain's historically fragile monarchy was restored for the second time in a century.
On Wednesday, Pere Navarro, head of the socialist party in Catalonia, became the first senior politician to call for Juan Carlos to abdicate in favour of his heir, Prince Felipe. "We need a new head of state to make the transition of the 21st century," he said.
While the socialist party's Madrid leadership refused to back Navarro, powerful sections of the party are pressing for a new transparency law to include a clause forcing the king to reveal detailed accounts of the royal family's spending.
The Spanish crown's growing problems were vividly depicted earlier this month when council workers armed with a metal ladder and a plaque turned up in a street named Rambla dels Ducs de Palma de Mallorca near the city's court.
With the help of a power-drill, it took just a few minutes to erase the dukes' names from a street map and to erect a new sign renaming the street "La Rambla". "And it would be best if they didn't show their faces around here any more," said one passer-by.