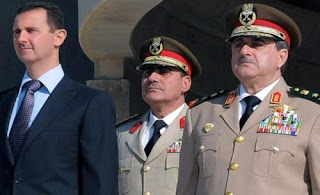 Based on reports in Arab media, Israel's News One is reporting that Bashar al-Assad has been shot and killed by

one of his bodyguards (link in Hebrew).

According to the report, Assad was shot by one of his bodyguards and hospitalized in a Damascus hospital. The report has
not been officially confirmed.


According to the report, Assad was shot by an Iranian officer named Mehdi Yacoubi, who was assigned by Mahmoud
Ahmadinejad to guard Assad.

Assad was rushed to the A-Shami Hospital in Damascus, where a riot broke out as Syrian troops blocked access to the
hospital.

Syrian television shut down while awaiting news of Assad's fate.

The French site JSS News reports that Assad was shot on Saturday evening,  but that he is still hospitalized lingering
between life and death (link in French). This is from a Google translation.

Update: According to Arab media www.eltira.org , Bashar al-Assad would have been seriously wounded by gunfire
last night Saturday, March 23 by his bodyguard but Iran is not dead. He is currently hospitalized, between life and
death, Shami Hospital in Damascus which the streets were closed.

Proprietary information (in France): According to reports in the Arab press (and then republished in the Israeli press ),
information that journalists say they have "verified" the Syrian dictator Bashar al-Assad was killed this morning by
one of his bodyguards. An important safety device has been set up at the hospital in Damascus.

The assassin Boucher Damascus would be his bodyguard Iran, a military officer named Mehdi Jakoby. He was in
charge of presidential security and was "offered" by Tehran's ally Syria. According to various sources, there are reports
of heavy fighting in any armed Damascus. The roads leading to the hospital would be closed.


Unconfirmed reports of Syrian President Bashar Assad’s shooting highlight chaos in country
Assad was supposedly shot by his Iranian bodyguard Saturday night, with at least one website saying he had been
‘assassinated.’ But other online updates by Arab and Israeli media say the report was untrue.
BY ERIK ORTIZ / NEW YORK DAILY NEWS

Arab media said Assad was purportedly shot by one of his Iranian bodyguards Saturday night and was in serious condition.

He was supposedly taken to Al-Shami Hospital in Damascus, where surrounding roads were closed off.

Israel News One’s website even reported that Assad had been “assassinated.”

But online updates said the Syrian leader’s shooting was false and that he was alive and in high spirits. The
conflicting reports highlight the chaos that continues to engulf the country, which has been mired in a bloody civil
war for two years.

Syrians chant slogans while holding Syrian opposition flags during a protest marking two years since the start of the
uprising in 2011. The resignation of the opposition leader's most prominent figure adds to disarray.

In the latest turn of events Sunday, the leader of the Western-backed Syrian opposition coalition announced he
was stepping down.

Moaz al-Khatib didn’t detail what motivated his decision, according to a statement on Facebook.

But he said he now has the ability to “work with freedom that cannot be available within the official institutions.”

Al-Khatib also said the international community has failed to adequately support the rebels’ fight against Assad.

A Syrian man cries outside the Dar El Shifa hospital in Aleppo, Syria, after his daughter was injured during a Syrian Air
Force strike over a school where hundreds of refugees had taken shelter.

The United States has provided $114 million in aid to the Syrian opposition, the U.S. ambassador to Syria told Congress
earlier this month — a higher figure than previously stated.

Secretary of State John Kerry, who made a surprise visit to Iraq on Sunday, said he wasn’t shocked to see al-Khatib
resign.

“I have appreciated his leadership, but the notion that he might resign has frankly been expressed by him on many
different occasions in many different places, and it is not a surprise,” Kerry said.

Some 70,000 Syrians have died during the conflict, according to the United Nations.