CANADA: When is the Sheriff not a sheriff? An OPPT point of consideration


CANADA: When is the Sheriff not a sheriff?
An OPPT point of consideration 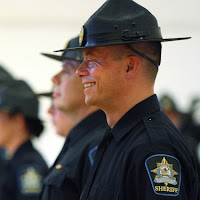 My colleague and former comrade-in-arms has been running an investigation. It began under the auspices of the Canadian Armed Forces and has now concluded independently. This seems fitting in a world in which we're all just now waking up to our own sovereignty as individual beings or, in OPPT-ese, as 'states of body'.

I was recruited for OPERATION MORNING STAR late last year. I had been following my own line of inquiry for several years, researching mortgage fraud after a major Canadian bank sold me a construction mortgage product that went awry the moment the deal was signed. I kept encountering bank irregularities and had clear evidence of ongoing loan manipulation and sharp practice. I brought the bank president's office directly under scrutiny over this matter and its implications. These are the circumstances that obtained when I began work with MORNING STAR in early January. Operations require code names. I was assigned HISTORIAN; my colleague is BRASS.

What follows below is an aspect of the above investigation now concluded. It's an important piece of a larger picture to consider, a rose from the desert. As always, I offer this material in the spirit of document analysis. Please go directly to the sources linked to the statements below and ascertain for yourself where the truth lies. As the Idaho Picker says, 'logic before authority'.

BRASS' role in MORNING STAR was much like the courageous role that Trustee Heather Tucci-Jarraf undertook for OPPT: she put her own house into foreclosure proceedings in order to trace the depth and breadth of corruption in the American banking and judicial systems. BRASS followed the same strategy on behalf of MORNING STAR in Canada, in parallel with OPPT's investigation. The OPERATION MORNING STAR report and findings will be made publicly available, as it was a main goal of the investigation to disseminate absolute data. At this point, I trust that I've already provided the reader with enough contextual information to easily make sense of the material that follows.

There's a script that banks run in the theater of home foreclosure, for those of you as yet uninitiated: when it comes right down to doing the court-ordered dirty deed, it's the sheriff's 'notice to vacate' that matters. The sheriff is officially supposed to be the impartial hand of justice, sworn and bonded to duty on behalf of the people. It's a big deal, frankly.

So picture this little vignette.

BRASS has in his hand a 'notice to vacate' his property (that is, the home in which he and his family live), issued by the Ontario Superior Court of Justice, an order "being executed pursuant to the instructions of: The Bank of Nova Scotia." The exact phrasing is, "I COMMAND YOU to vacate the premises... If you fail to VACATE the premises as directed by the above referenced order by the date shown, I will, without further notice to you, carry out the order as directed." This notice is signed by a woman whose signature sits above the printed honorific, 'Sheriff'. [1]

BRASS phones the sheriff's office in order to request an appointment, so that he can deliver to her an OPPT Courtesy Notice. During the conversation, BRASS asks the woman to whom he is speaking whether she is in fact the sheriff, and she affirms that this is so.[2]

The non-sheriff then fetches another woman from an office; the two consult with one another and then return to BRASS. And here it all gets very Monty Python. Non-sheriff defers to the second woman as 'Sheriff'. But the second woman tells BRASS that no, in fact she is not the sheriff either. Like her colleague, she just signs 'things' on behalf of the sheriff. Neither woman is willing to accept a Courtesy Notice, because, as they note in chorus, "we're not the Sheriff."

BRASS subsequently recalls a conversation he had with a retired Ontario sheriff some years ago, in which it was explained that when Ontario Premier Mike Harris was in office in the late 1990s, he closed down all the sheriff's offices in the province and replaced these seasoned officers with desk clerks.

HISTORIAN does some research and confirms BRASS' recollection. The desk clerks in question are now called 'enforcement officers'. This is the "name formerly used for an officer of the court who is responsible for enforcing court orders."[3] The sole duty of the 'enforcement officer' is to process the paperwork for property foreclosures. The Enforcement and Finance Office (Civil) of the Ontario Superior Court of Justice (which used to be called the Office of the Sheriff) reveals additional descriptive information:

And so it emerges that the office of sheriff in the province of Ontario is a ghost office. There is no sheriff. The sheriff does not exist. There are no lawfully sworn and bonded sheriffs in Ontario, only regular government desk clerks who pose as sheriffs for purposes of evicting people from their homes. Premier Harris and subsequent premiers neglected to inform the people of Ontario that there were no more sheriffs. We've had to discover this for ourselves.

The awkward little difficulty here is that impersonating a peace officer is a felony under the Canadian Criminal Code. Oops.[5] Moreover, a non-sheriff signing documents as 'Sheriff' constitutes forgery, another felony. Oops again.[6]

HISTORIAN then reads through the Ontario Ministry of Attorney General's current recommendations concerning this Enforcement and Finance office that has silently replaced the Sheriff's office. There's a clear focus here on expediting judgments on behalf of banks:

"Confidence in the civil justice system will only exist if this process can produce the results that judgment creditors are entitled to—payment of their debt in a simple and efficient way. At present, that confidence is threatened... a new restructured Enforcement Office which would be responsible for the co-ordination and general operation of a new enforcement system. Both of the proposed regimes would rely on a new computerized province-wide Enforcement Registry. Once a Notice of Judgment has been registered in the Enforcement Registry, all of the debtor's personal property would be bound."

Perhaps these Ministry recommendations are a tad problematic in light of the fact that there are no sheriffs but instead only clerks fraudulently standing as their proxies. OPERATION MORNING STAR encourages anyone facing home foreclosure in the Ontario to bring this material to the attention of their local, um, 'sheriff'. Stop into their office for a visit. Take an OPPT Courtesy Notice with you.

[2] BRASS (who is versed in the laws governing wiretapping and intercept) has recorded this phone conversation for his own reference.

[3] "SHERIFF: The name formerly used for an officer of the court who is responsible for enforcing court orders... Now called Enforcement Officers."
See: "Glossary of Terms - Ministry of the Attorney General"
http://www.attorneygeneral.jus.gov.on.ca/english/glossary/default.asp?search=s*

[4] See: The Enforcement and Finance Office (Civil) of the Ontario Superior Court of Justice
http://yorknorth.cioc.ca/record/NKT0430

[6] "Every one commits forgery who makes a false document, knowing it to be false, with intent (a) that it should in any way be used or acted on as genuine, to the prejudice of any one whether within Canada or not; or (b) that a person should be induced, by the belief that it is genuine, to do or to refrain from doing anything, whether within Canada or not."
See: Criminal Code, RSC 1985, c C-46 s 366
http://laws-lois.justice.gc.ca/eng/acts/C-46/page-176.html#h-102