BEIRUT—Lebanon's Prime Minister Najib Mikati resigned on Friday effectively dissolving the government and thrusting the country into political uncertainty at a time when the conflict in Syria is sparking sectarian tensions here. 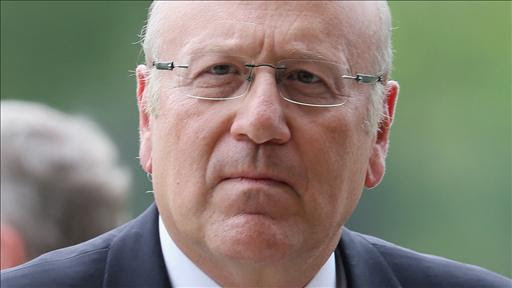 Lebanon's Prime Minister Najib Mikati resigned on Friday effectively dissolving the government and thrusting the country into political uncertainty. Farnaz Fassihi reports. Photo: Getty Images.
Mr. Mikati's resignation came as a result of a disagreement with the cabinet over extending the mandate of the Internal Security Forces Chief Maj. Gen. Ashraf Rifi.
"The region is heading toward the unknown and the regional fires are hitting us with their heat. The domestic divisions have left deep wounds and economic pressures are increasing from all sides," Mr. Mikati said in his resignation speech televised live.
Mr. Rifi is a Sunni and allied with the opposition March 14th political faction, seen as more pro-western and openly critical of the Syrian regime. Mr. Rifi would retire because of his age on April first, but because of Lebanon's precarious situation, Mr. Mikati asked the cabinet to amend the regulations and extend his term.
The cabinet, dominated by the so-called March 8th political faction allied with the Shiite political and militant group Hezbollah, refused. Extending Mr. Rifi's term would be a symbolic gesture to ease the fears of Sunnis in Lebanon and keep their grip on the internal security apparatus.
Mr. Mikati's government will function as a caretaker government until the parliament chooses another prime minister, which could happen as early as next week. The prime minister would then have to form a government, which could take months since the outstanding differences between the political factions will continue.